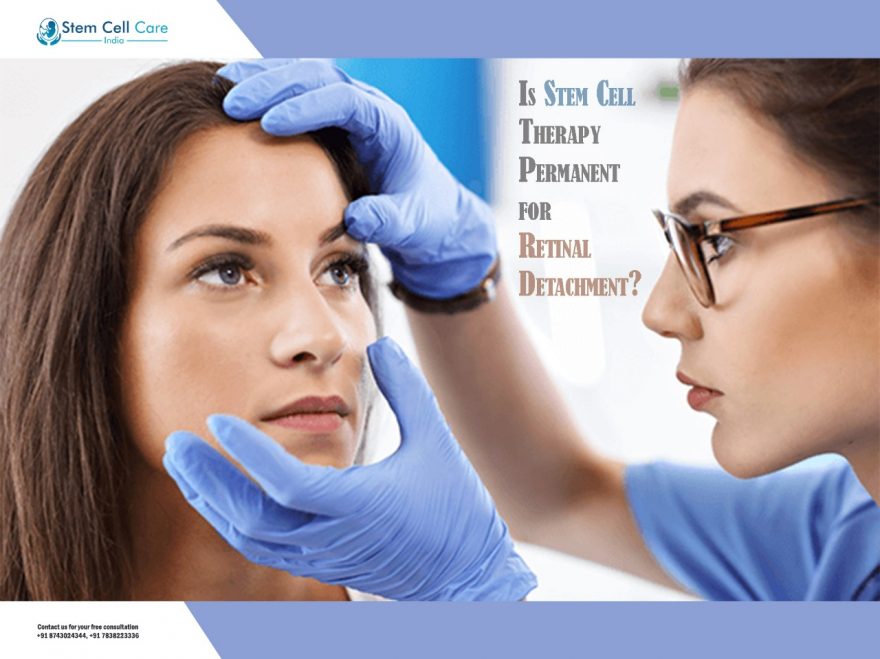 Retinal detachment is a case in which a thin layer of the tissues that percept light and vision situated at the back of the eyes pulls away from its normal position. Retinal detachment separates the retinal cells from blood vessels that provide oxygen and nourishment to the eye. The longer retinal detachment lingers on, the greater the risk of permanent damage is.

Warning signs of the condition would include reduced vision and the sudden appearance of floaters flashes of light; contacting a specialist right away could improve the chances of recovery in vision.

Warning signs of retinal detachment may include reduced vision, the sudden appearance of floaters and flashes of light. It’s essential to take notice of these symptoms immediately and seek medical help to ensure that the vision is not impaired beyond recovery.

Retinal Detachment itself is painless and causes minute discomfort, but warning signs appear almost before it occurs or has advanced; these may include symptoms such as

As according to medical records, there are three different types of retinal detachment

Growth of abnormal scar tissue due to fluctuations in blood pressure or any other underlying health issues causes the retina to pull away from the underlying layer of skin, which provides it nourishment. People with poorly controlled diabetes or other under lying high blood pressure condition generally suffer from this type of retinal detachment.

These types of retinal detachments are the most common. Caused by a hole or tear in the retina of the eye allowing the fluid to pass through and collect underneath the retina. This fluid builds-up and causes the retina to pull away from the underlying tissues. The area of the retina which detaches loses life as blood supply is hampered and causes vision impairment.

In this type of detachment, fluid accumulates beneath the retina, but no holes or tears appear in the retina. One of the main reasons behind such a condition would be age-related macular degeneration, injury to the eye, tumors or inflammatory disorders.

Who are at most risk of the condition?

According to recent research, ESC, due to their extensive proliferation and differentiation, have been used as a cell source to treat various kinds of degenerative diseases, including retinal degeneration. According to a research report conducted on a mouse model, sub retinal transplantation of hESC- derived RPE cells showcased no tumor growth with the transplanted cells at the injection site even after months of injection. And one of the most significant achievements of the whole process remained to be that injected cells formed an RPE monolayer above the native layer. In a similar study, RPC’S derived from hESCs integrated into the mouse ganglion cell layer. Outer nuclear layer thickness increased in the injected animals. In another study involving non-human primates, sub retinal transplantation of hESC-derived retinal organoids was well tolerated and the transplanted cells integrated into the retinal layer in the injury sight. These researches indicate a profound future for Stem Cell Therapy for the treatment of eye related ailments such as retinal detachments and other conditions which cause retina to damage. For stem cell therapy in India Stem Cell Care India could be your best alternative. Their team of highly experienced doctors and healthcare providers make sure that all the present medical issues are attended to as profoundly as possible. Whether you reside in India or abroad Stem Cell Care India and its professionals can help you plan your appointments and treatments according to your comfort, contact today. 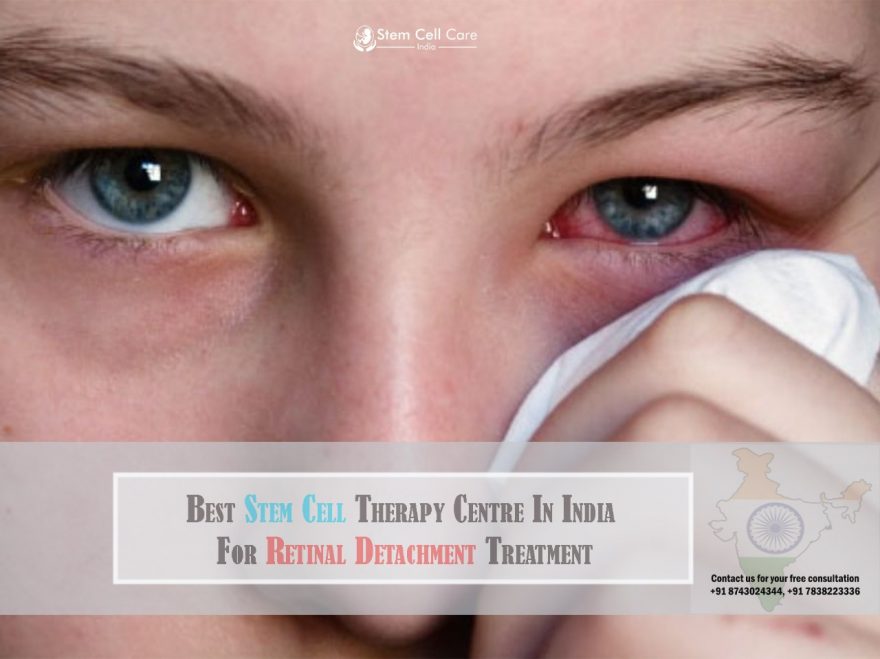 Retinal Detachment is an emergency situation where the Retina detaches from the thin layer of tissue at the back of the eye. The longer retinal detachment goes untreated worse would be the consequences. Once Retina detaches from the preface of the eye at the back, the Retina starts to die away as the nourishment, and blood flow is restricted. Some of the most apparent and prominent symptoms of the condition are.

The sudden emergence of floaters in the eye

If the symptoms mentioned are becoming apparent in your condition, it would be a wise move to consult a doctor and seek attention for all the underlying issues which might be causing such problems. Once your eye care provider makes sure that the condition you are suffering from is a retinal detachment, its possible that the next discussion will be about treatment options from here on forward. Possible treatment options for retinal detachment are.

In some instances, while undertaking medical supervision, as soon as the symptoms become apparent, your ophthalmologist might diagnose a retinal tear before the Retina starts pulling away from the underlying tissue. Your provider would use a medical laser or a freezing to seal the tear, creating scar tissue that would hold the Retina in place.

A approach of profound use if the detachment is not extensive. In this procedure

In this procedure, the surgeon removes the vitreous and any tissue impacting the retina air, gas, or silicone-based oil and is then injected into the eye to keep it functioning as it should. Eventually, the air, gas, or liquid would be absorbed, and the vitreous space would again fill up with body fluid. Vitrectomy may be combined with the Scleral Buckling procedure to ensure the conditions get better.

Stem Cell therapy, used for regenerating the Retina and other cells that help in the perception of light and vision, has been a regular research subject for many years. According to research conducted In an RP mouse model, subretinal transplantation of iPSC-derived RPE spheroids delayed thinning of retinal ONL; high pigment epithelium-derived factor levels reduced the number of apoptotic cells with a microglial infiltration in the Retina. Mesenchymal cells have also been studied extensively for their potential in treating several retinal disorders. According to a recently conducted research, human dental pulp-derived MSCs on intravitreal transplantation improved the retinal function in a rat model or reversed retinal degeneration. Intravitreal injection of the umbilical cord-derived MSCs and the exosomes derived from UC-MSC’S into the anterior ocular chamber induced the proliferation of progenitor cells in the ciliary body. It promoted ocular regeneration and repair in the glaucoma model. For Stem Cell Therapy In India, Stem Cell Care India could be your best alternative. Their highly trained doctors can make sure you receive the best possible treatment for your ailments. Whether in India or abroad, you can schedule your appointments with just a call. 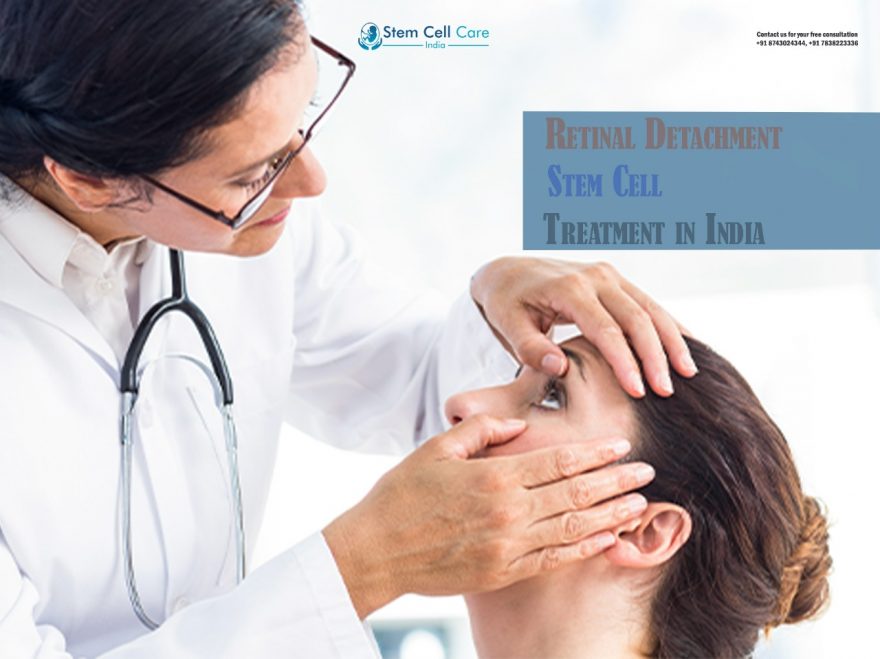 A Sudden increase in floaters, small dark spots or squiggly lines that float across the vision, flashes of light in one eye or both eyes or a curtain or shadow over your vision could be a few of the warning signs prevalent before retinal detachment. If you have witnessed any of these symptoms, seek supervision from an ophthalmologist. The condition can be recognized only after a dilated eye exam.

People with the following conditions or symptoms are at an increased risk of retinal detachment.

Mesenchymal cells have also been studied extensively for their potential in the treatment of several retinal disorders. According to a recently conducted research, human dental pulp-derived MSCs on intravitreal transplantation improved the retinal function in a rat model or reversed retinal degeneration. Intravitreal injection of the umbilical cord-derived MSCs and the exosomes derived from UC-MSC into the anterior ocular chamber induced the proliferation of progenitor cells in the ciliary body. It promoted ocular regeneration and repair in the glaucoma model.

There have been several studies that analyzed the potential of MSC-derived factors and cells, engineered MSC to repair the damaged retina. Human-derived BM-MSC significantly protected RGCs and prevented retinal fiber layer thinning in a preclinical rat model of glaucoma. Injection of the stromal fraction of adipose tissue, which is enriched with pericytes, decreased vascular leakage, apoptosis and improved vision in a DR mouse model. These favorable research findings have showcased the potential of Stem Cells in improving upon the prevalent conditions of diseases like Retinal Detachment. If you have been suffering from any such conditions, Stem Cell Care India could provide some of the best alternatives for treatment. Their team of highly experienced professionals make sure that all your conditions are taken care of and attended to in the most profound manner possible. Stem Cell Care India provides treatments specifically designed to keep the unique needs of patients in mind, helping them wade through some of the unique limitations they might be suffering from. Stem Cell Care India can provide its due care whether you reside in India or abroad.