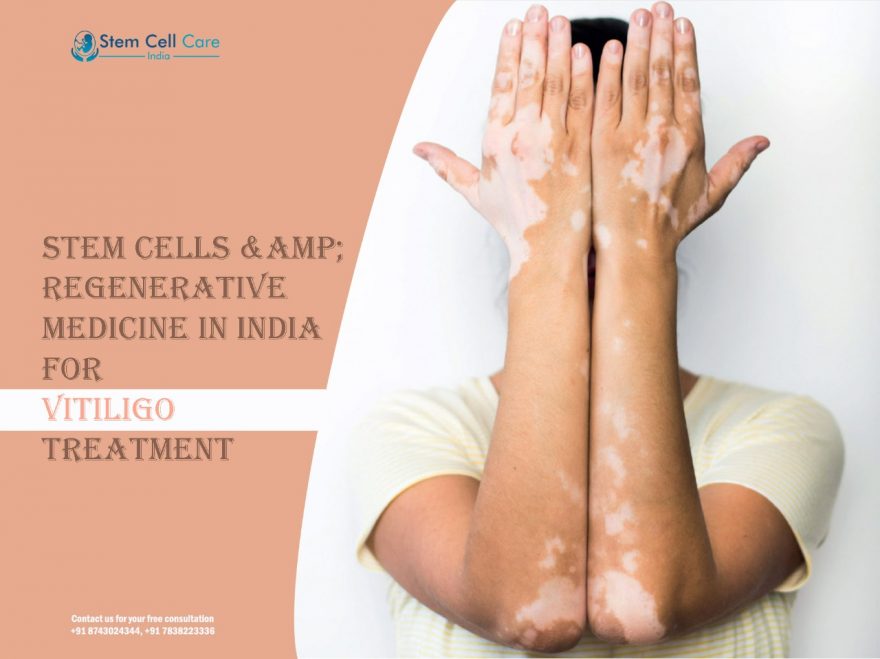 Development of pale areas of skin more vulnerable to sunburn is known as vitiligo. There could be several reasons behind it, including autoimmune conditions, family history of vitiligo or severe skin damage, or prolonged exposure to hazardous chemicals.

Who are at the most risk?

Certain prescription medications that are available in the market can help in restore the color of your skin; these could be from the corticosteroid family as well; these medication work best for people who recently developed the condition; being corticosteroids, the medication cannot b used for more extended periods, when used in short periods these provide the best results.

This medication does not belong to the corticosteroid family and hence can be used for longer periods of time; these work best for the skin on the head as well as on the neck. Another medication known for lost pigment is calcipotriene; not effective when used alone, but it can lead to positive results when used with an ointment of the corticosteroid family. Applying both these medications as directed can increase the amount of repigmentation one sees in their complexion.

Vitiligo tends to spread slowly, but occasionally, it spends up rapidly all over the skin; in case you are witnessing new patches and spots on your skin, your dermatologist might prescribe Prednisone, a medication that can reduce the rate at which the disease is growing, it mostly comes in a pill form, most doctors prescribe it for one or two weeks.

In this therapy, the affected skin area is exposed to ultraviolet light that can restore the natural skin color. In case a large area of the body needs treatment, the doctor might advise for phototherapy. In case the spots are more minor in size a, laser therapy can also help; a laser can specifically target a single area without any effects on the other skin regions. The treatment works best to correct pigmentation in the face and neck. The lips, tips of fingers, and toes are least responsive to treatment with light therapy.

Auto reactive CD8+ t – Cells are the primary suspects that are considered to be responsible for the destruction of melanocytes. The topical use of autoimmune inhibitors, including those derived from the MSCs thanks to their immune-modulatory properties, have been reported to successfully promote repigmentation. MSCs can suppress the proliferation of CD8+T via the NKG2D pathway, including T –cell apoptosis. Pharmacological agents which reduce cellular oxidative stress with the topical application of antioxidants and growth factors have also been in use. Intravenous administration of MSCs have shown to regulate the level of reactive oxidative species in a mouse model. For Stem Cell Therapy in India, Stem Cell Care India could be your best alternative. Their highly trained professional doctors can make sure that the treatment you receive is up to spec and all-inclusive of all possible treatment options for early results. 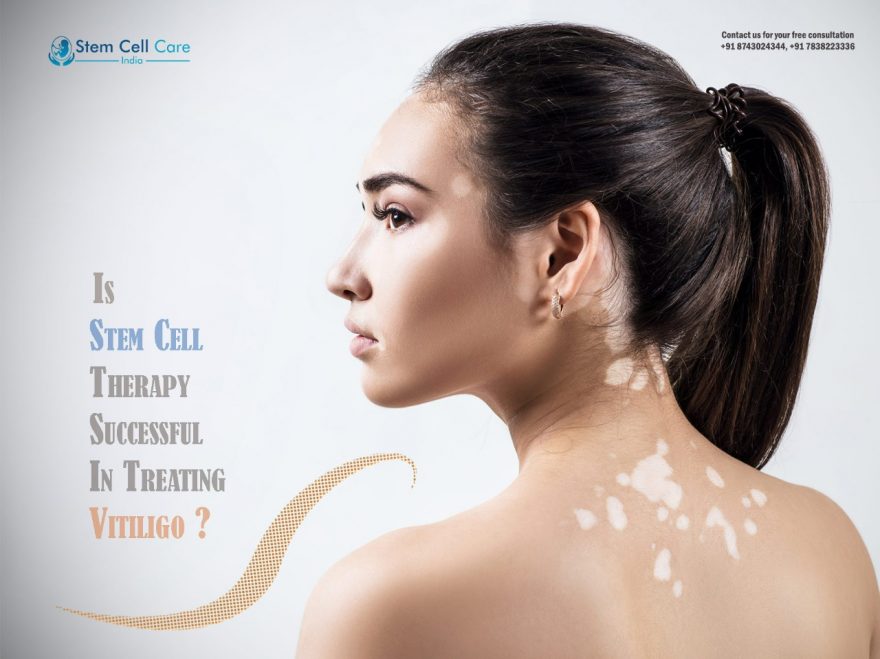 Vitiligo is a condition under which pale white patches form upon the skin; the main reason behind the condition remains to be a lack of melanin, which is a skin pigment. Vitiligo can affect any area of the skin, but most commonly, it appears on the face, neck, hands, and in the skin creases. Over time the pale areas of the skin become more vulnerable to sunburn; hence it becomes essential to take due care and use sunscreen with a high protection rating.

Although Vitiligo can appear on any part of the body but some of the most commonly affected areas include.

In some instances, Vitiligo can develop at the roots of the hairs on the scalp. The lack of melanin in your skin can turn the hairs in the affected area white or grey. As Vitiligo progresses, the patches formed on the skin gradually turn white; in some instances, the color of the path could be a feeble pink. The edges of the patch can be smooth or irregular. In certain cases, these edges could be red and inflamed or showcase brownish discoloration.

The condition can vary from person to person. Some might only get a few patches. Others might get more extensive patches that join across the skin. There usually is no way of predicting how much skin would be impacted, but the white marks left behind are permanent.

There exist two prominent types of Vitiligo; these include

Vitiligo is majorly caused by the skin’s lack of pigment known as melanin. Melanin is produced by skin cells called melanocytes, providing your skin with its naturally occurring shade. When the body is deprived of enough melanocytes to produce enough melanin in your skin, depravity leads to white patches that appear on your skin and hair.

The presence of Autoimmune conditions means that instead of attacking foreign and alien cells, the body ends up attacking the immune system and attacks the body’s healthy cells and tissue. In the case of non-segmental Vitiligo, your immune system devastates melanocyte skin cells that make melanin. In certain cases, Vitiligo can be triggered by particular events, such as

Hair follicle melanocytes play an essential role in the repigmentation of Vitiliginous lesions. Migration of the precursor melanocytes in the mid portion of the hair follicle, later found to be MelSC’s, have been implicated in the repigmentation obtained following both chemical and physical stimulus. According to research in cases of Vitiligo, there was selective destruction of selective DOPA- positive melanocytes, whereas the DOPA–negative MelSCs in the outer root sheath of the hair follicle were spared. These MelSC are supposed to be responsible for repigmentation in Vitiligo by dividing and migrating upward along the surface of the hair follicle nearby epidermis. Research done in a mouse model showcased that HFSCs in the bulge section region could migrate up into the epidermis to cause perifollicular repigmentation, which later spread in a concentric pattern causing diffused repigmentation. These observations suggested that SLF provided new routes connecting the follicular ores and the epidermis, along which the melanoblasts can migrate to occupy vacant niches. For Stem Cell Therapy In India, Stem Cell Care India could be one of the best healthcare providers; contact them today and schedule your treatment.